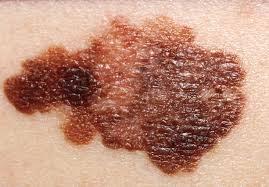 Cutaneous malignant melanoma is a cancer of the pigment cells of the skin. If it is treated early, the outlook is usually good. It is not contagious. The word ‘melanoma’ comes from the Greek word ‘melas’, meaning black. Melanin is the dark pigment that gives the skin its natural colour. Melanin is made in the skin by pigment cells called melanocytes. After our skin is exposed to sunlight, the melanocytes make more melanin, and so the skin becomes darker.

Melanocytes sometimes grow together in harmless groups or clusters, which are known as moles. Most people have between 10 and 50 moles and often they are darker than the surrounding skin. Melanomas can come up in or near to a mole, but can also appear on skin that looks quite normal. They develop when the skin pigment cells (melanocytes) become cancerous and multiply in an uncontrolled way. They can then invade the skin around them and may also spread to other areas such as the lymph nodes, liver and lungs.