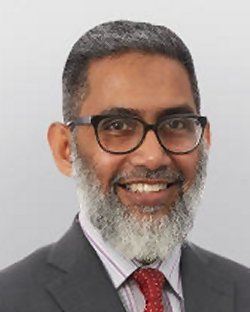 Mr Sufi is the lead Bariatric and Upper GI surgeon at the Whittington Hospital. He is a Fellow of the RCS of England since 1996 and acquired an MS from the University of London in 2000. Subsequently he obtained his Fellowship in General Surgery from the Intercollegiate Board in 2005 followed by a CCT in 2006. He obtained his first consultant post in 2006 at Central Middlesex Hospital. Subsequently, in 2007, he was appointed at the Whittington Hospital and led the development of the multidisciplinary bariatric surgery service. This is one of the select centres for provision of Bariatric Surgery in the South-East of England. Subsequently, he was awarded a Chirurgie Laparoscopique degree from the University of Strasbourg following advanced laparoscopy training.


More details on Mr Sufi and the services he offers are available at Whittington, CEBLS, London Obesity Clinic and Spire Bushey websites.