Mary Seacole Chosen as the Face of Whittington Health 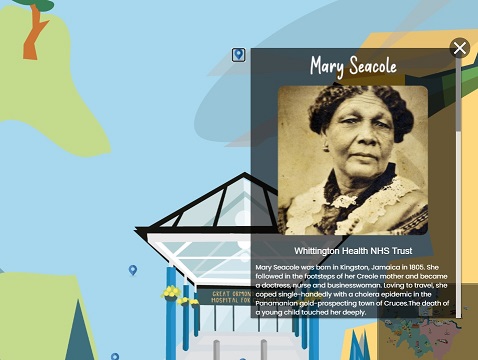 To mark Black History Month, the NHS in London has revealed 36 prominent individuals it has chosen to be ‘the faces’ of the NHS Trusts in the capital. Our B.A.M.E. staff network considered who should represent our trust and agreed that Mary Seacole should represent us.
You can see the map and all of the Black Icons.
Mary Seacole, in whose honour two of our wards are named, was a pioneering black nurse who not only saved hundreds of lives but also helped to break down barriers for people from B.A.M.E. backgrounds to enter the profession.
We have two wards at our hospital are named in honour of Mary Seacole. But did you know why we chose to name them after her or that she was a pioneering black nurse who not only saved hundreds of lives but also helped to break down barriers for BAME people to enter the profession?
Mary Seacole was born in Kingston, Jamaica in 1805. Her father was a Scottish soldier, and her mother a practitioner of traditional Jamaican medicine who owned a boarding house where she cared for injured soldiers and their wives. Whilst growing up, Mary learned about medicine from her mother, soon gaining her own reputation as a ‘skilful nurse and doctress’.
A product of a mother who encouraged her to be useful and independent, a father who told his daughter tales of the battlefield to stir her blood and an elderly friend of the family to whom Mary was sent for her education Mary developed a curiosity and extraordinarily complete self-confidence.
Driven by what she described as an ‘inclination to rove’, she left Jamaica. She travelled as a trader in the Caribbean and to Britain before returning to Jamaica during her marriage to Englishman Edwin Seacole. Edwin sadly died just eight years after they married but Mary continued travelling after his death. Ever the astute businesswoman, she opened a hotel on the isthmus of Panama in 1851.
While she was in Panama, cholera broke out. Mary was fascinated by it. She studied its pathogenesis, epidemiology, its management – even performing a secret autopsy on an infant casualty, to better understand this terrifying disease. Her methods would still be recognised today: replacing lost fluids with cinnamon water and keeping the sickroom as clean and well-ventilated as possible, which wasn’t easy in the close and putrid Central American heat.
When news reached her in 1854 that war had broken out between Britain and Russia in the Crimea, Mary determined to visit the theatre of war as a nurse at the age of nearly 50.
Applications to the War Office and to join Florence Nightingale’s nurses were firmly rebuffed. Perhaps it’s not surprising: Mary was used to being her own boss, and highly unlikely to submit to orders without question, which all Nightingale nurses were required to do. And, of course, she was black. So she simply changed her plans, going into business partnership with a relative of her late husband to set up ‘The British Hotel’ right behind the front lines between Balaklava and Sevastopol. Soon the entire British army knew of ‘Mother Seacole's’.
Whenever there was any battlefield action, or sick and wounded in need of attention in camp, Mary would cheerfully dash to help, day or night, armed with a capacious satchel crammed with medicines, dressings, food and drink, and a bottle of sherry to use as antiseptic. She made no charge, accepting payment of course when it was offered, but expecting none.
It was W.H. Russell, the first modern war correspondent, who made Mary Seacole famous. He described her as ‘a warm and successful physician, who doctors and cures all manner of men with extraordinary success. She is always in attendance near the battle field to aid the wounded, and has earned many a poor fellow’s blessings’.
When Mary returned to England after the war, she was famous but penniless. Lord Rokeby and Lord Paget, both Crimean commanders organised a benefit festival at the Royal Surrey Gardens in Kennington to raise money for Mary. There were over 1,000 performers, and her name was ‘shouted by a thousand voices’.
She also wrote a best-selling autobiography, The Wonderful Adventures of Mrs Seacole in Many Lands in 1857. She enjoyed the patronage and friendship of soldiers, officers, aristocrats and even members of the royal family until her death in 1881.
Mary Seacole was all but forgotten when she died. Her celebrity, born of her own strength of character, died with her, until a group of Jamaican nurses rediscovered her and the autobiography was reprinted in the mid-1980s. Now she is recognised not just as an icon of black history, an indomitable woman traveller, a nursing pioneer, a writer of huge wit and charisma and an inspirational – if accidental - feminist. We salute her as someone with the fearlessness and confidence to carve her own path and follow it with integrity, good humour, compassion and enormous spirit.